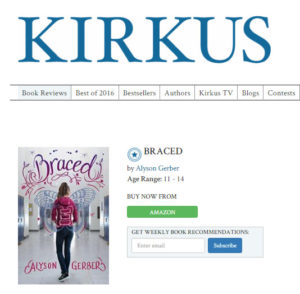 BRACED has received a starred review from Kirkus Reviews!

“Both the literal and figurative senses of the word “spine” form the backbone of Gerber’s debut.

The same day white seventh-grader Rachel Brooks starts in an important soccer game, she learns that her scoliosis has worsened, and she now needs to wear a brace for 23 hours a day. The author, who wore a brace herself, vividly conveys its constricting bulk. But her spine isn’t the only curve Rachel has to brace herself for. Her mother, whose own scoliosis required a spinal fusion, is rigid and unsympathetic as the brace affects Rachel’s soccer technique and jeopardizes her place on the team. Her classmates gossip, and though her friends and crush are generally supportive, the author nails their realistic discomfort at being bullied by association. Ultimately, her friends help her to adjust, and Rachel learns to assert herself. As Rachel grows a spine, her mother learns to bend, sympathetically revealing the fears she never addressed during her own treatment. Their disparate experiences give scoliosis—and their relationship—nuance as well as tension. The author doesn’t diminish Rachel’s difficulties, but at heart her story is uplifting; a brace can be a “built-in drum” to dance to. An author’s note provides a short list of scoliosis resources.

Comparisons to Judy Blume’s Deenie (1973) might be inevitable, but Rachel stands admirably on her own. (Fiction. 11-14)” —Kirkus, Starred Review