Since BRACED will be in stores in less than two months, I thought I’d share my Author’s Note, which explains why I wrote the book. 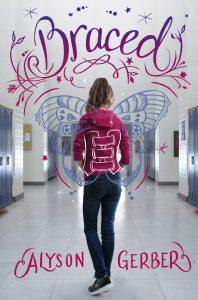 Scoliosis is an abnormal curvature of the spine that affects an estimated seven million people in the United States. While girls are eight times more likely than boys to need treatment, this condition affects children of all genders, races, and social classes. Scoliosis impacts children with congenital and neuromuscular diseases, but it is most common in healthy children, where it usually has no known cause.

I was one of those kids, and at eleven, I got a back brace for scoliosis. The “S” curve in my spine had progressed to twenty-five degrees, and my doctor wanted to do everything possible to avoid surgery, which my mom had undergone when she was my same age. He prescribed a Boston back brace, similar to the brace Rachel wears in this book, for twenty-three hours a day until I was done growing. It hurt to breathe and move inside my thick plastic shell, and everything was harder—standing, sitting, sleeping, getting dressed, having friends, and just being a kid. I felt confined by my new responsibility and closed off from my friends.

Over time my brace became easier to manage physically, but emotionally I never adjusted. During the two years and four months I spent in a brace, I didn’t open up to anyone about how alone and insecure I felt. I held my pain inside. It took all of my strength to go to school acting like nothing had changed, while at the same time feeling uncomfortable and exposed. I used my brace as a shield, because I didn’t want anyone to see me the way I saw myself—as different. As an adult, I can see that was a mistake. I never stopped hating my brace, and it was such a big part of who I was every day that it had a negative effect on my self-image. I struggled for a long time after my brace came off to break that pattern of insecurity.

It wasn’t until I was in my twenties, when I started talking about my experience of being treated for scoliosis, that I realized how alone I’d felt. Since I began working on Rachel’s story, I have met many people with scoliosis, including my editor. I’ve found that connecting with others who went through a similar experience has allowed me to feel understood and see the incredible impact wearing a brace had on my life. It has also made me aware and more sensitive to the fact that many of the people around me felt different in some way as kids. My hope is that by raising awareness about and sensitivity for kids with scoliosis, Rachel’s story might be a gateway to heightened understanding for others. I know now that had I let even one other person in on my pain, I would have felt less alone, and maybe instead of feeling different, I would have been able to see that I was strong and fearless and most of all brave.

Listed here are places where you can connect with other kids being treated for scoliosis and read more about the condition and how it gets treated: